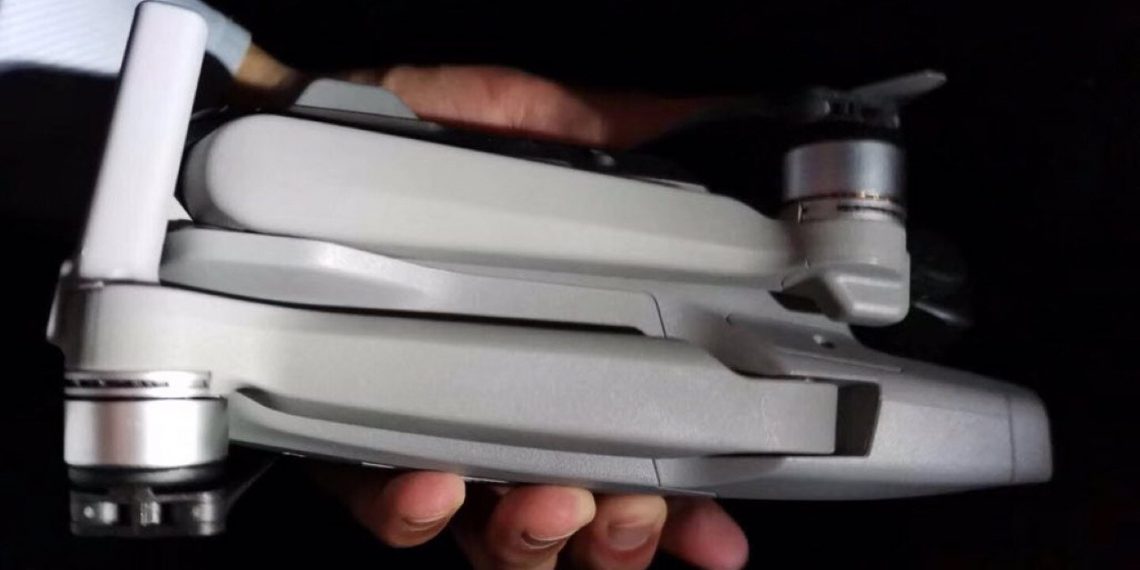 Recent leak reveals that DJI is working on what appears to be a brand new DJI Mavic Air 2. This flying machine is rumored for an expected launch date in April 2020. As you can see from the images shown in the featured picture, the design of Mavic Air 2 is eerily similar to the Mavic 2 Pro / Mavic 2 Zoom.

These pictures of potential DJI Mavic Air 2 were leaked by OsitaLV on Twitter, who is well-known for leaking DJI prototypes. The original DJI Mavic Air made their debut in January 2018. So, it does make sense for a replacement.

The first thing that stands out the most from Mavic Air 2 is the brand new design. As you can see, the design is similar to the design of Mavic 2 Pro / Mavic 2 Zoom. However, don’t be fooled by the design. It is certainly not new and possibly delayed the introduction of Mavic 3 Pro. But of course, this is the DJI Mavic Air 2 drone. Let’s examine closer and see what we can learn from this quadcopter. 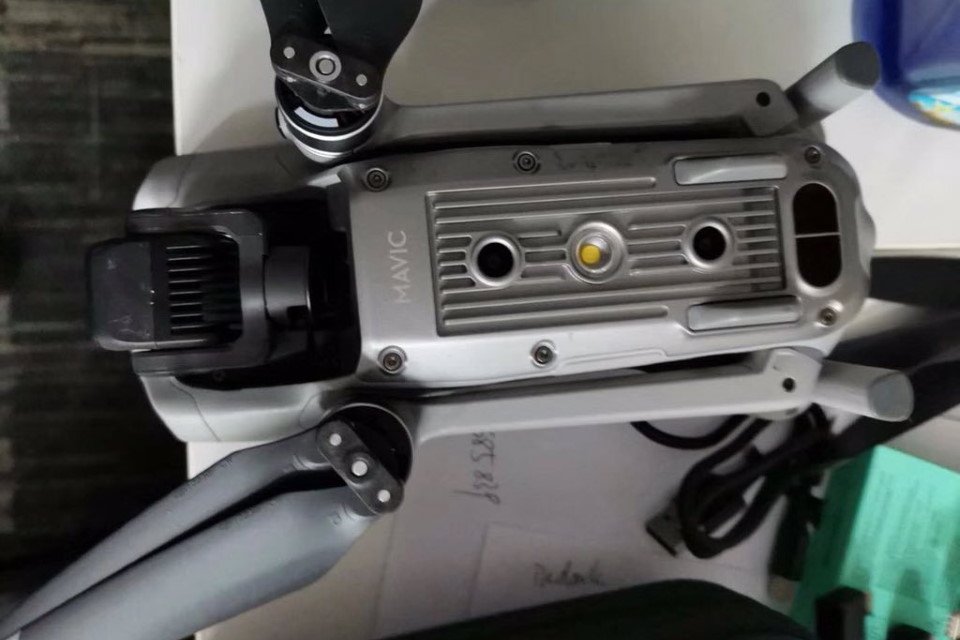 First off, the design quality of DJI Mavic Air resembles closely to the DJI Mavic 2 series and I think it is a smart move on the company’s part. The design of Mavic 2 drones is very durable and sturdy that makes it one of the best built quadcopters. So, why wouldn’t you want to incorporate these strengths onto the Mavic Air 2 drone?

Secondly, this drone has the same silent propellers as its grand sibling does.

On further examination, the DJI Mavic Air 2 drone comes with expanded sensors around its body. Which features dual vision system, infrared sensing system, and bottom auxiliary light to help with low-light vision sensors. In addition to that, the Mavic 2 Air comes with 360-degree obstacle avoidance sensors. 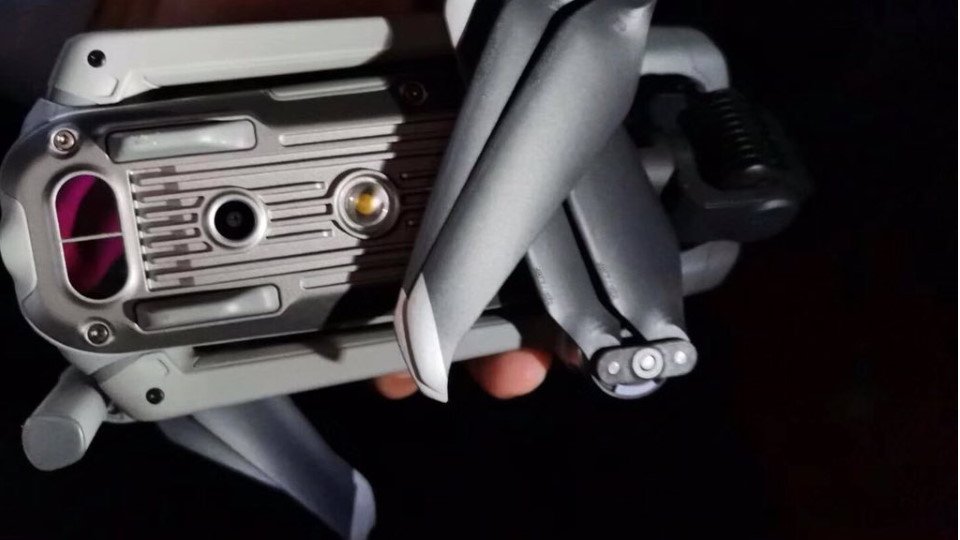 The gimbal and camera setup is similar to how the Mavic 2 Pro is equipped with. But from what we can see, the sensor size appeared to be a much smaller size. It is unlikely to be a 1-inch sensor, therefore, it is probably between 1.2/3 to 1.2/4-inch sensor.

As per FAA’s new rule to require all next generation drones to be equipped with ADS-B that lets the quadcopter pick up nearby manned aircraft. When an aircraft is detected, they will warn you via DJI Go 4 App to pilot in command. As it seems the DJI Mavic Air 2 will be one of the first consumer drones to come with ADS-B capability.

The new DJI Mavic Air 2 remote controller is different from its predecessor. While it has roughly the same shape and design as DJI Smart Controller, minus the built-in display. Plus, instead of inserting your smartphone via handle arms, you will be able to mount on the top of the remote controller which is a highly intuitive location. 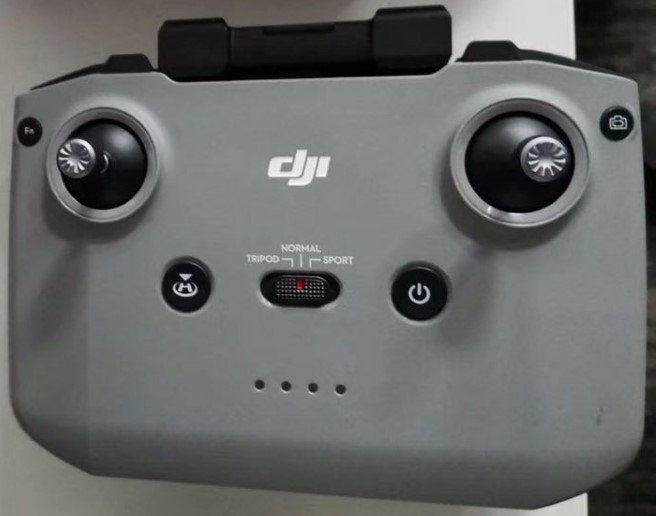 Additionally, we see a fully functional return to home button, switch for tripod, normal and sport mode, on/off button, video/photo button and battery status indicator. More toggles are located on the top and probably on the bottom. As much as we are excited about the potential launch date for DJI Mavic Air 2 drone, specs and features are yet to be announced.

However, we are going to take a guess based on what we have gathered throughout all DJI Mavic 2 Air rumors. Stick around with us to learn more about what we will expect to see from the upcoming DJI Mavic Air 2 drone.

Below is what we are hoping to see from brand new DJI Mavic Air 2 drone that is slated for launch date on April 2020:

While it’s exciting to learn that DJI is working on the Mavic 2 Air drone. The company is also working on launching at least 3 new drones this year, Inspire 3, Spark 2 and Mavic 3 Pro. They also are working on an unnamed drone which we don’t know yet — most likely a brand new family lineup.

Are you looking forward to DJI Mavic Air 2 drone coming out in the market soon? Let us know what you think of this fancy flying machine! Stay tuned for more updates on new gadgets that’s just right around the corner on Gears Deals!