The DJI Mavic series have grown in popularity as of recently with the Mavic Mini, Mavic Air 2 and Mavic 2 launch. If you are looking to pick up one of these foldable smart camera drones, but not sure which one is the right pick for you.

Then you will find our DJI Mavic Mini vs Mavic Air 2 vs Mavic 2 comparison guide useful and informative as we help you navigate around these popular Mavic series. Before we compare these smart foldable camera drones, let’s briefly explain each drone and their purposes so that you have an idea of what they are designed for.

What Are Mavic Drone Series

Often of the time, the Mavic series are classified as portable and compact types of drones designed for beginners, aerial photographers and avid travelers. Due to their size, they can be easily folded into a brick-like and store inside a travel case or backpack.

The Mavic series are one of the first one to introduce foldable motor arms and propellers using aerofoil technology. Ever since it was introduced, it has trickled downwards to more affordable drones like the Holy Stone HS510, Matavish 3 and more recently Eachine EX4 drone.

In this ultimate comparison guide, we will talk about the difference between these following drones:

At the end of our DJI Mavic series comparison guide, you will be able to make the right shopping decision that matches your needs and preferences. Personally, all of these Mavic drones are great and I like them. But it is not for everyone. Which is why we created this guide to help you choose the right Mavic drone for yourself.

The Mavic Mini, as the name of this drone suggests, is the most portable and smallest camera drone out of all. It weighs 249 grams or 0.55 lbs, which means it does not have to be registered by the FAA in order to fly it legally.

When it comes to the size of this drone, the Mavic Mini has a total dimension size of 140 x 82 x 57mm when folded. Upon unfolding with the propellers on the drone, it extends upwards to 245 x 290 x 55mm.

You can easily hold this drone onto your hand. In fact, it only makes up for roughly the surface area of an adult’s palm hand. Which reveals how small the Mavic Mini actually is.

Now, why should you buy a DJI Mavic Mini if it’s so darn small? For starters, this camera drone boasts an impressive flight time of 31 minutes. It has a maximum remote control distance of 2.5 miles and can capture stills + videos at 4K UHD resolution quality.

Travelers were complaining about how heavy the drones are. Sometimes they couldn’t fit the drones in because they were too big and took up a lot of space despite efforts to make them smaller and smaller.

Plus, not all drone laws are the same. Some countries are relaxed when it comes to drones, and some are stringent with it. Because of that, travelers had to register their drone in advance before they could fly.

The DJI Mavic Mini solves all of these problems by making the drone smaller while packing serious punches. This drone doesn’t come with high-end technology that bigger Mavic drones does as it will take up more space for additional features. But, the Mavic Mini is the ultimate form of traveling for avid travelers and aerial photographers.

The Mavic Air 2 is definitely a stunning change from a widely popular and iconic Mavic Air. Its design looks very similar to both Mavic Mini and Mavic 2 drones. Although, if you are looking for a drone that can produce beautiful aerial shots and do what its baby brother can’t.

That’s where the Mavic Air 2 comes into action. For starters, this foldable camera drone weights 1.26 lbs and has a body dimension size of 180 x 97 x 84 when folded. Upon unfolding the drone with propellers on it will extend the body dimension size to 183 x 253 x 77 mm.

Just like its baby brother, Mavic Mini, you can easily hold the Mavic Air 2 with just one of your hands. It’s lightweight and compact enough to be stored inside your backpack or jacket pocket for easy and simple traveling.

On the front, this drone is equipped with a 4K HD camera which is mounted on a 3-axis gimbal stabilizer. The camera features built-in HDR technology that improves the color grading for a much higher footage quality. In addition to that, the Mavic Air 2 has an impressive MB/S of 120.

Which puts it far ahead of Mavic Mini in terms of recording footage and quality. Beside, the Mavic Air 2 has a total flight time of 34 minutes with a maximum remote control distance of 6.2 miles.

If you are an avid traveler and professional aerial photographer, you are going to want to have a drone with awesome flight performance. At the same time, a drone with good camera specifications and quality shots.

The Mavic Air 2 weighs slightly more than Mavic Mini and definitely will be required to be registered with some of the country’s civil aviation authorities. It is one of the best Mavic series for anyone who wants a smart camera drone with superior flight capabilities. 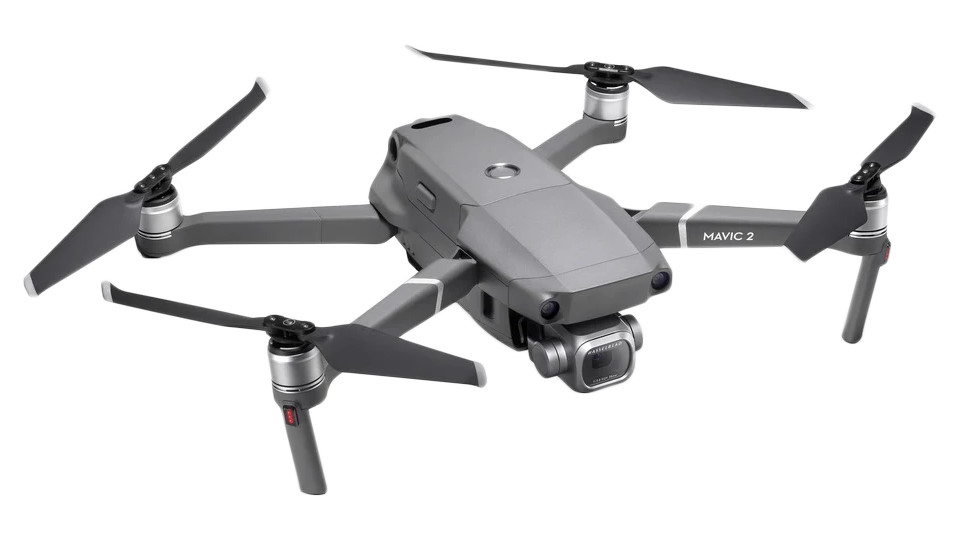 If you are looking for the best of all with hulking technology, aerial capabilities and tons of features. Don’t look any further because the Mavic 2 is the perfect drone that will match your needs and preferences.

The Mavic 2 drone comes in two different models, Pro and Zoom. Although in this part, we will be focusing on the Mavic 2 Pro as it is the ideal choice for professional aerial photographers and travelers.

While the Mavic 2 Zoom is great for travelers and beginners, we felt it doesn’t come with any significant upgrades as it is similar to the original Mavic Pro. That being said, it has built-in zoom capabilities and is good for capturing from a distance without interfering.

In the front, the Mavic 2 Pro is equipped with a Hasselblad camera. Which is a camera professionally made by a Swiss manufacturer that delivers the best imaging quality in all range, such as lighting, color, details, and clarity.

This drone is equipped with 4K camera capabilities and can record 4K videos at 30 frames per second with a bitrate of 100 MB/S. It does fall a little bit short of what the Phantom 4 Pro has to offer with 4K @ 60 FPS.

Nevertheless, the Mavic 2 drone can be flown up to 31 minutes. They also recently got a range upgrade which increases the maximum transmission distance to 6 miles. Many professionals prefer this camera drone over other Mavic series mainly because of imaging quality and flight performance.

Keep it in your mind that the Mavic 2 drone can fly up to 45 miles per hour and resist moderate winds with ease (even in strong winds) whereas Mavic Air 2 and Mavic Mini couldn’t. Regardless of the weather condition, Mavic 2 is the drone that you can take out and fly for most of the time.

Overview of Key Features for Mavic 2

Before we conclude our DJI Mavic Mini vs Mavic Air 2 vs Mavic 2 comparison guide for beginners. You might be still asking yourself which drone you should buy. First of all, I want to say that all of these drones are awesome. They are great, compact, flexible and super easy for a beginner to learn how to fly.

But as I mentioned previously, not all of these drones are going to be the perfect pick for everyone due to preferences and needs. So to wrap this comparison guide, I am going to create simple pointers to help you decide which Mavic drone to buy.

That’s all folk. I hope you find our DJI Mavic Mini vs Mavic Air 2 vs Mavic 2 comparison guide helpful and informative. If you have any questions about these Mavic drones. Feel free to ask us in the comments section below. Happy flying and stay tuned for more deals at Gears Deals.